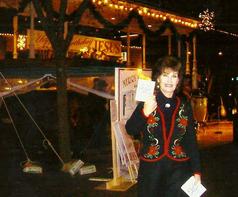 So often we hear, “but I’m only one person so I can’t change anything”. Whether you are a man, woman, boy or girl, you can make a difference. History is full of single individuals who have even changed the course of nations. It does take time, commitment, money, zeal in the heart and sometimes even your life, plus years of work to make a change. Remember that one woman had prayer taken out of our schools. That shows how a single person can cause an effect. – Doris Fowler

This history of the “Marietta Square Nativity” is to encourage all believers to persevere and to stand firm in their convictions. Scripture says in 2 Timothy 1:7, “God did not give us a spirit of fear, but of power, love, and a sound mind”.

Testimony by Ron Hollingsworth Homeless man in the park

On December 18 I was in the park on the square in Marietta Ga., when I saw a young man lying down in the gazebo. I noticed that he had a large back pack and he looked very tired. I went over and started talking with him and found out that he was homeless. The weather was very dreary so I asked him where he was staying that night. He said he would probably find a tree to get under out in the woods. He also mentioned that if it got too bad he may go to Elizabeth Shelter for the homeless. It broke my heart to a seemingly intelligent man as he told his story. His wife had put him out of the house a few days earlier. I asked him what brought him to the park. He said he saw the Nativity and decided to go closer while he rested. He said that when he looked at the baby lying in the manger that it gave him an inner peace. I asked him if he was a Christian and he said that he was saved at a young age. He told me that he was used to being a loner and of course that hurt me deep inside. I told him that Jesus never leaves or forsakes us. He said he knew that. I prayed with him and left some tracts to read. He said he appreciated me coming by and talking with him.

As I walked off he kept sitting there looking toward the Nativity. I thought to myself, if he was the only person that was there that night it was worth all the time and effort involved in setting up the Nativity.

As Rev. David Legrand and I started taking down the Nativity on December 19, 1998 to finalize the three days that it had been up we noticed a young lady that walked up to the scene and then walked away. Then she would come back again as if she couldn’t get enough of it. The lady was an innocent looking young adult. She would keep coming back several times and walking around it as if she was being drawn to it. She was very soft spoken as we conversed with her. She wanted to know why we were taking it down and we explained to her that it had been up three days and that was all of the time that parks and recreations of Marietta would give us. She seemed sad that we were taking it down.

Hopefully in the future it can stay up much longer for people such as this young lady. If more Christians that love Jesus will get involved it can and will.

On the afternoon of December the l8~ while I was watching the Nativity and straightening it up on the platform, a mom and dad brought their little girl to see it. It was as if she couldn’t get close enough to see baby Jesus. She had her parents to lift her up on the platform and then she walked over to the baby and gave him a big hug. It was a beautiful sight.

Two middle aged ladies were walking in the park on the evening of the 18 of December. As they walked by the Nativity one of them stopped and admired the aesthetic appeal. It was apparent that she was a lady of great culture. She started asking questions about the origin. She said that she had seen one in Italy that looked identical. When I told her that it was sculptured by Fontanini in Italy she was ecstatic. As we shared with her that it was handmade and also shared a little history about it I could tell by the nodding of her head that she was familiar with the works.

Your tax deductible donation can also be mailed to:

Christmas 1993; my family and I attended my granddaughter, Michele’s choir special on the Marietta Square. The joy of expecting to hear songs celebrating the birth of Christ and the true meaning of Christmas was gone. Not one song or word was uttered in His name. Upon questioning the choir director I was told that it was against the law. In disbelief I looked around the park for a Nativity scene and there wasn’t one. All of my life growing up in this county, there had always been a Nativity during Christmas. We left the park that night in disbelief with heavy hearts.

In January 1994, one month later, I received a newsletter from the “American Center for Law and Justice” and there was an article concerning our rights as Christians, according to the law, to have a Nativity in the public parks. It was as if God was saying to me, “There is your answer to prayer, now take advantage of it”. From that time on He would never set me free from the task, regardless of all the frustrations or time it took.

The next year, in 1994, I made copies of the ACLJ’s Nativity legal rights and took copies to the Mayor, City Council, and the head of Parks and Recreation. I made phone calls and had meetings with other people as well. By Christmas time, I had gotten nowhere and then was told I would have to sue the city of Marietta. Meanwhile Santa Claus was on the Marietta Square the month of December.

In 1995 the ACLJ continued to encourage me to keep at it. When I realized I didn’t have a Nativity if granted the right to have one in the park, God took care of this problem. The first place I called not only had a nativity, but to my surprise, it was the original one that had been on the Square all the previous years. It had not been on display for over twelve years. Now it could hopefully go back on the Square with all its new paint and restoration. What a wonderful discovery!

The remainder of 1995, I spent time on the phone, meeting with city officials and pastors and was still told that I would have to sue the city. To give up would have been very easy to do.

The week before school started, I took my granddaughter with me to City Hall for what I thought was to be the last effort before a lawsuit. I’ve never sued anyone and I was sick of the thought of it. During the second meeting, by standing firm and not giving in to compromise, God did his miracle and the opposition stopped. I was informed that during the last two years, the rules had been changed to the park. With a half million-dollar insurance policy and a sixty-day notice for approval we could set up a nativity for three days. Another miracle, by the time all of this had been done, on the day that I walked into the Parks and Recreation office it was exactly sixty days to the date of the deadline. The responsibility lifted and there was a freedom that I hadn’t felt for a long time. The Marietta Square would honor Jesus again on the Marietta Square!

In January 1996 I received a letter that the Nativity I had borrowed could not be used again so God had another plan.

During 1996, meetings and time were spent trying to get the churches and the Christian community involved to keep the Nativity on the Square, as older individuals we will eventually be gone. Finally, October 1996 a break came, but God really had to do a fast miracle because the sixty-day deadline was only two weeks away. I was speaking at a pastors’ meeting and one pastor caught the vision. God released me and peace came.

Since that time God has blessed us beyond anything that I had ever hoped for. The Nativity on the Square is a work of art by Fontanini. Donations from many Christians have made this possible. Now we have choirs and individuals coming during the three days, singing about our  precious  Lord Jesus. The freedom is won back and what a blessing to others as they visit our park to see and hear the true meaning of Christmas.

People in public office are not to be feared. We elect and pay them so we are responsible as to who makes the laws that govern us. “All it takes for evil to prosper is for Gods people to do nothing (Edmund Burke)”. Let your voice be heard and vote.

My granddaughter is seeing and experiencing the right to take a stand for freedom and to be a lady with Christian principals and not to yield to compromise. God can use anyone; all it takes is a willing spirit and a heart to do His will.

We now have a committee of pastors and Christian lay persons to carry on this freedom and work. I want to thank each one involved and ask God’s richest blessings on them and those that follow with this work in the years to come. Pray for more than three days to be allowed in the park. This would be a wonderful blessing.